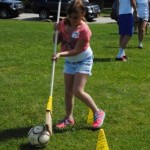 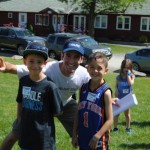 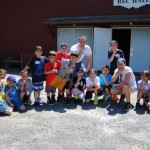 On Sunday, June 8th, our newest Starlighters and their families got a taste of what is to come this summer during new camper day, and we can tell you that they’re a VERY enthusiastic group! Campers got to know one another while engaging in such activities as stacking cups and maneuvering balls around cones with brooms before David called everyone to the flag pole for staff introductions and the raising of the flag…and, of course, our sole birthday camper skipped around the pole.

The day also included an Option period and a team scavenger hunt that challenged campers to learn as much as they could about Camp Starlight by traveling to different locations around camp. All of the new campers were quick studies and the scores were close, but in the end, the Lower Junior Boys proved that they may be the newest and youngest campers at Camp Starlight, but they’re also some of the cleverest.

The day wrapped up with an indoor cookout. We were sad to see everyone go so soon. One day just isn’t enough. But we’re counting down the days until ALL of our campers arrive for the summer. ONLY 19 MORE DAYS!

This entry was posted on Tuesday, June 10th, 2014 at 3:12 pm and is filed under Uncategorized. You can follow any responses to this entry through the RSS 2.0 feed. You can leave a response, or trackback from your own site.