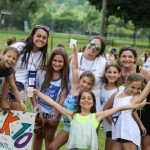 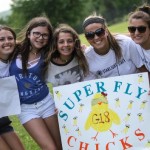 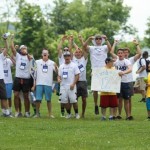 Have you ever tried to thing about your absolute, favorite part of camp? I bet it’s hard to think of just one. There are so many activities, events, and moments at camp that can turn into a favorite in just a matter of seconds.

From a staff perspective, it’s hard to choose just one favorite part about camp. Most staff members have never experienced anything like Camp Starlight before. Every day of the summer is new and exciting for them. They could wake up and say, “That was my favorite part of Camp”, until something even better is thrown at them, and they change their mind over and over again.

My favorite part of camp is possibly one of the most anticipated days of the summer. When the Starlight Summer really begins, welcome day, the first day.  The energy that is flowing through the camp, even before the busses arrive, is crazy. Counselors are so excited to meet their campers and really get the ball rolling.  As those first buses pull up, there is an intense mix of emotions; excitement, anxiousness, happiness, and even a slight feeling of fear. But once all those kids run off the bus carrying sports equipment and bus bags, and the biggest smiles you could ever imagine, the atmosphere drastically changes and it’s one of the best feelings in the world! You suddenly know that you are in for the best summer of your life, and can’t wait to see what’s next in store!

So staff, what is YOUR favorite part of camp? Comment in the section below, or feel free to send us your own personal blog at info@campstarlight.co After the initial feelings of elation that come from having completed their first summer at camp, many first year counselors are left wondering what comes next. For some, the choice to return to camp (or not) is an obvious one. For others, there are many factors involved, impending college graduations or internships, the prospect of a full time job, etc. Others simply need time to process the summer before making a decision. What may have seemed like a one-time-only experience in the moment, proper reflection can give birth to goals that require at least one more summer. Still, some counselors are just too exhausted to even consider next summer without some down-time to rest. During the transition, priorities often quickly shift from camp to academic responsibilities. Although the final decision to return to camp may be months away, fall is actually a good time to make a tentative decision about whether you’re interested in returning and initiating communication with your camp.

Because summer camps recruit heavily during the early part of the new year, they like to have an idea about which staff members have intentions of returning prior to the end of the year. This helps them focus their recruiting efforts. It’s therefore a good idea to contact your camp sometime during the fall to let them know your overall feelings about your summer experience and to express interest in returning the following year.  Although your camp may not have made final decisions about which staff members it will invite to return, having an idea of who is interested in returning is helpful when creating recruitment plans.

Likewise, if you think you might want to return to camp next summer in a different role than you had this season, the fall is a good time to express that interest so that your camp knows that you want to be considered for that role should an opening become available. For clarification, it’s a good idea to explain why you think you might be a good fit for your desired role as well. Although it may be obvious to you why you might be right for that role, your camp likely goes through hundreds—if not thousands—of resumes each year. Some proactive notes from you may be helpful.

Making a tentative early decision about potentially returning to camp also gives you more time to prepare for the experience. Even well-seasoned counselors sometimes find themselves scrambling to make summer plans come together at the last minute. The earlier you commit to another summer at camp, the more time you have to financially prepare for the travel to camp. This is of particular importance for international staff who tend to have significantly higher traveling expenses than domestic staff.

Keeping in contact with other staff members is a way to keep camp fresh and the anticipation high throughout the year. It’s also a great way to position yourself to hear news of rideshares or winter join ups among staff.

With a little advanced planning and proactive measures on your part, ‘So now what?’ easily becomes, ‘Now it’s time.’

While I am now surrounded by the comforts of home, I would gladly give them all up again just to be back at camp, sleeping in my bunk. I must admit that the first few days of falling asleep in a quiet room, sleeping in my own bed, and waking up without bugles ringing in my ear have been nice but it does not seem to make up for the longing I have for my bunk.

Each summer when all of my bunkmates arrive at camp, we run to our bunk and begin to make it our summer home. On the porch we hang a big welcome sign with all of our names. We unpack our clothes and place them in our cubbies. Then each bed takes on a personality of its own with its bright sheets and blankets, fun pillows and sentimental stuffed animals. As the summer moves on the walls begin to fill up walls with posters, letters and pictures from home. The bunk becomes a disco, a runway, a theater where we perform. We play on the floor with jacks, cards and trade stickers. At night, we lay in our beds sharing stories. When the lights are all out, we continue to laugh and whisper until sleep fills the air. What I miss the most about my bunk is waking up, looking around and knowing that all my friends are there.