Counsel for a Summer. Impact for a Lifetime. 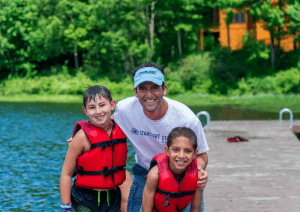 Working at Camp Starlight for a summer is fun, challenging, and rewarding. You have the opportunity to live in a bunk with our campers on our beautiful campus in the endless mountains of Northeast Pennsylvania. You will work with campers during each of our six activity periods. However, you will be with the kids so much more often than that. In fact, you’ll be with them from wake-up to bedtime.

Mealtimes. Rest Hour. Shower Hour. Activity Periods. All-day long, you have the chance to interact with our amazing campers. And as lucky as you are to be with them, they are equally fortunate to have you as one of our amazing staff members.

Through all the time that you spend with your campers, it only takes a single moment…a single moment to change a child’s life. This may sound like something out of a fantasy novel, but it is absolutely true. We can all think back to a single conversation we had with an adult when we were younger that still impacts us today. The strangest part about this “moment”? You will never know it’s happening, and neither will the child. You may say something that seems inconsequential to both of you. Then, days later, that child is still thinking about it and you have long since forgotten about it. Years later, you’ve changed that child’s future based on a single conversation, and while they frantically search for your phone number to say “Thank You,” you may hardly remember that camper.

At the conclusion of my third summer at Camp Starlight, I received a Counselor Appreciation letter from a camper who wrote about something that had happened the summer previously. The letter detailed a very intellectual and emotional realization that the camper had due to an interaction we had. However, this interaction wasn’t a profound conversation or a disciplinary issue. This interaction was me turning off the water while he brushed his teeth. He turned it back on. I turned it off. We went back and forth several times, and, amidst our laughter, I finally convinced him to leave it off once I left the bathroom. In my mind, that was the end. However, for reasons he explained in the letter, this was genuinely a meaningful moment in his life that he still thought about over a year later. Without his Counselor Appreciation Letter, I would have never known this “moment” existed.

As a counselor at Camp Starlight, we only ask that you come as you are. Athletic, quirky, nerdy, shy, outgoing, or anything in between. We’ve seen it all and appreciate it equally. As a staff member, we don’t expect your summer to be filled with life-changing moments. In fact, looking for these moments would be counterproductive. By simply being yourself, you will build strong relationships with your campers.

So, don’t search for this “moment.” Embrace your individuality and cherish the summer with these amazing children because as much as you can impact them, they will certainly have an impact on you.