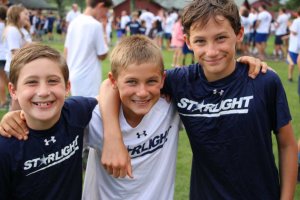 Camp Starlight is focused on developing the whole child in a way that is healthy and fun. And although all of the running, jumping, swimming, climbing, dancing, and playing is great for their physical health, working on their emotional well-being, their character, and their self-confidence is just as necessary. This is why we put so much emphasis on having a growth mindset vs. a fixed mindset.

By definition, people with a growth mindset “believe that their most basic abilities can be developed through dedication and hard work—brains and talent are just the starting point. This view creates a love of learning and a resilience that is essential for great accomplishment. On the other hand, people with a fixed mindset “believe their basic qualities, like their intelligence or talent, are simply fixed traits. They spend their time documenting their intelligence or talent instead of developing them. They also believe that talent alone creates success—without effort.”

Campers come to camp with the labels and expectations that the world has put on them, and many have come to believe that these traits, both good and bad, are just an integral part of who they are. Some have been told they are smart their entire lives, and their fixed mindset makes them believe that their intelligence is something that comes naturally to them and doesn’t require effort to improve upon. The same goes for athletic performance, relational ability, and their character. Campers who have been told they have anger issues will begin to believe that they are incapable of handling their anger; it is a fixed part of them that can’t be changed or improved upon.

At Camp Starlight, we focus on fostering a growth mindset in each camper. When they succeed, we praise their efforts by saying things like “you worked so hard at that” instead of “you are awesome!” Although the latter can be helpful to hear, hearing specific praise acknowledging the effort that the camper put into a specific task is more rewarding and builds their self-esteem. Camp staff and counselors work hard to praise the process instead of just the person. Campers will hear us say things like:

We try to avoid labeling campers or putting too much emphasis on the labels they put on themselves. We want to encourage them to see themselves as capable and worthy of improvement in all areas of their lives. We want them to strive to be the best versions of themselves instead of being complacent with the label they’ve grown so comfortable with.

As campers step out of their comfort zones and try new things, they realize that they are capable of so much more than they thought and that their qualities, strengths, and abilities are not fixed. We want campers to be intrinsically motivated; to try new thing and preserve through hard things to feel good about themselves, not because they are seeking the approval of anyone else.

A summer at camp is about growing, maturing, and improving in all areas of life. Our goal is that campers leave with new friends, new experiences, and a stronger sense of who they are and what a valuable asset they are to the world. And it all starts with how they think about themselves.