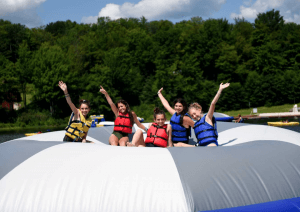 As an adult, there is nothing more annoying that coming across someone who feels that their opinion is the only opinion and that everyone who doesn’t agree with them is wrong. It’s hard to form and keep friendships with people who don’t appreciate or respect the difference of other people. This is why at Camp Starlight, we implement the “Don’t’ Yuck Someone Else’s Yum” guidelines, which helps campers appreciate and respect the likes and dislikes of other campers.

Teaching campers to be respectful of the opinions of others, even when they don’t agree, is just another way going to camp builds character and teaches valuable social skills. Campers are bound to come in contact with people who have different opinions and preferences from them around camp, and counselors encourage campers to embrace the difference and learn to disagree is a respectful way.  This helps prepare campers for the real world and sets them up to be tolerant and accepting members of society.

Campers learn that everyone has different likes and dislikes, but that is not helpful or necessary to make others feel bad for their opinions or preferences. Campers who are made to feel bad or embarrassed about their personal preferences are less likely to speak up or say what is on their mind, which is not something that we want to happen at camp, ever. We want to create a safe place where every camper can express himself or herself and have their voices heard without the fear of rejection or judgment. The “Don’t Yuck Someone Else’s Yum,” rule at camp helps to create this safe environment, and teaches campers the value of diversity in the people around them.

Teaching campers not to be negative or judgmental about the preferences of others is also helping them learn proper etiquette and manners. Whether it’s at mealtime or any other time around camp when opinions and preferences are expressed, campers are practicing how to be polite and well-rounded individuals, which will undoubtedly transfer over to their world at home.

If your child gets home and you turns their nose up to the delicious broccoli and Brussels sprout dinner you’ve prepared, you can kindly remind me of what they learned at camp, and say “Hey, Don’t Yuck My Yum!” We can’t guarantee they’ll eat the veggies, but it will help them be respectful of the different opinions and tastes of the people around them.