As the summer comes to a close, a feeling of anticipation fills the air. A quiet sound starts to arise that begins to get louder and louder…. “1, 3, 5, 6 we want olympics… 1, 3, 5, 6 WE WANT OLYMPICS!” The sound of this all too familiar cheer echoes across the camp as campers ranging from juniors to seniors clap and shout at the top of their lungs. Even the counselors join along in excitement as they know that the fun and spirit has only just begun.

Before we know it, the chants turn into a reality and OLYMPICS IS HERE. We spend all summer guessing what the newest breakout could be, but when it finally comes we couldn’t even IMAGINE how awesome it is! Ice skating at the flagpole? Running around camp to decode the drones’ secret message? What will it be next!? Whether it be at night, during the day, or early in the morning, the surprise of Olympic breakout is destined to be a highlight of everyone’s summer!

When the moment arrives, the entire camp uproars in excitement as the team lists fly into the air and campers search frantically to see whether they are on Blue or White. The Leadership teams are announced and David declares that Olympics has officially begun! The first team meeting kicks off Olympics and it’s time for everyone to get P-S-Y-C-H-E-D!

B-L-U-E we got the spirit! W-H-I-T-E that’s how we spell victory! Dressing up head to toe in your team color and learning the multiple cheers is one of the most fun parts of Olympics. It’s a chance to get decked out and show just how spirited you are! Both during games and in between, campers and counselors alike can be seen walking around camp cheering for their team with the utmost enthusiasm. It’s a time for everyone to bring out their creative, silly, and SPIRITED personalities. 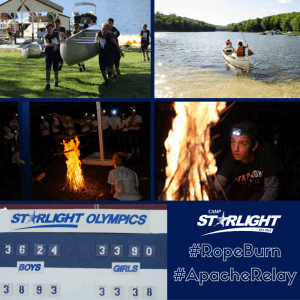 Aside from the spirit that Olympics brings out, getting to compete in different sports is the best part for many. Olympics is a time for campers to show all that they’ve learned over the summer and bring out their athletic side. From a soccer game on the alumni that goes into a shootout to an intense game of basketball that goes into double overtime, you truly never know what to expect when the Blue and the White face off.

Even if you don’t consider yourself to be a major athlete, Olympics has something for every camper to enjoy! A part of Olympics that campers and counselors alike look forward to is the apache relay. Whether it be catching a pancake and eating it, writing with your foot in chalk, or breaking a shirt that’s trapped in ice, the Apache Relay is always an event that is sure to be full of twists and turns that will keep the entire camp in high suspense. For all of our campers and counselors that know their random facts and figures, the Trivia Bowl is a perfect time to shine as the Blue and White battle it out in a series of intense, (and silent!) rounds. And how could we forget one of the biggest parts of Olympics- Sing! As the Blue and White practice with energy and dedication, they are able to show off their talent and hard work when they compete head to head at the Rec Hall.

In the blink of an eye, the past five days of spirit, intensity, and fun all comes to an end as the teams rush the lake and put a close to our Olympic competition. Later, as both teams come back together and gather around the flagpole to watch the Olympic torch go out, Olympics is officially declared to be over.  Everyone around camp is left in anticipation of what next summer’s Olympics will bring and wishing we could fast forward time.

This entry was posted on Monday, May 22nd, 2017 at 8:44 am and is filed under Uncategorized. You can follow any responses to this entry through the RSS 2.0 feed. You can leave a response, or trackback from your own site.