Becoming a Leader Through Leagues 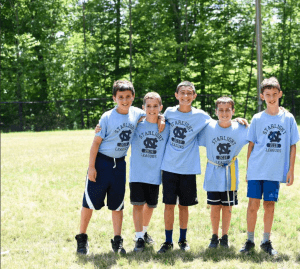 Each summer, Camp Starlight features an intra-camp League, in which every camper is assigned to a team named after a College Athletic Program. The teams compete throughout the summer in various sports against all the other teams. The teams are competing within their divisions to win the coveted Ben and Jerry’s Ice Cream prize at the end of the season.

Because our League teams are named for schools, days in which campers participate in leagues games are called College Days. When it’s a College Day at Camp Starlight, you know it! Campers dress in their team shirt to get in the competitive spirit and cheer their teammates on the sidelines to support the team. The teams will face-off once per league day in a grand show of athleticism, sportsmanship, and fun.

For individual campers, competing in leagues provides familiarity, as they have the same teammates for the duration of the summer. This creates an environment that fosters stronger relationships, cooperation, camaraderie, and responsibility.

When players first start to play together, they become aware of their individual strengths and how they can contribute to the team. Those who have strengths in a certain area, have the opportunity to be a teacher and a role model for their teammates. In other areas or sports, these campers may switch roles, allowing our campers to learn to be great leaders and great learners. They gain self-confidence through their own performance and by encouraging their teammates.  Team members build upon each other’s strengths to better the team towards a common goal.

Leadership, however, isn’t just about ability. It’s about being accountable for one’s actions and leading by example. All players get the chance to develop leadership through determination, communication, self-confidence, and drive.  Even if a camper isn’t a top athlete, they have the ability to lead through great sportsmanship and a positive attitude.

Because leagues promote teamwork and foster relationships, campers also become better at communicating. And because sports also instill self-esteem, Campers not only communicate better, but they do so with confidence.

In the end, the winning teams might get the ice cream, but everyone receives the added benefit of becoming a better leader.

This entry was posted on Wednesday, November 6th, 2019 at 12:03 pm and is filed under Summer 2019. You can follow any responses to this entry through the RSS 2.0 feed. You can leave a response, or trackback from your own site.