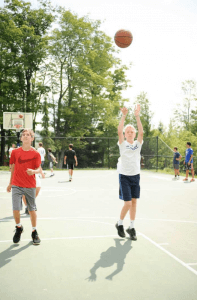 Camp Perlman was no match for the team play of Starlight. After a strong start from all players, Starlight broke away to steal the win with class. Tyler H. and Maxwell S. had the basket clear in their sights and finished with team high scores of 21 and 13 points respectively. David H. also contributed with 11 points and Ozzie F. scored 10 points. Max G., Sam Y. and Sam S. created lots of movement throughout the court and also snatched 4 points each. A great win for our blue and white Lower Senior boys.

The Starlight girls came off the bus and onto the court with a high energy that was hard to match for the opposition, Westmont. Multiple scoring contributions were made to give us the lead early, which Starlight maintained for the remainder of the game. Thanks to an outstanding defensive effort from Sarina S., Hannah G. and Miley Y., Westmont was only able to score 6 points throughout the entire game. On the offensive end, Dylan S. scored 13 points, Avery G. put up 4, Claudia C. contributed 2, and Mikayla T. added 2 points and 6 assists, leading to a final victorious score of 21-6. It was an impressive first game for the 5th grade girls and they’re excited to take on their next competitors.

Camp Starlight Lower Senior Boys played hard and competitive in their recent basketball game against Morasha, showing a true demonstration of who we are as Starlighters. The game was intense and evenly matched Each Starlight boy played their heart out.Tyler H., Max G., and David H. scored several points during the game. Maxwell S. and Julien A. had some great steals and Blaze L. had many rebounds just to name a few. The campers from Starlight showed passion, teamwork and sportsmanship and coach Jay was extremely proud of the team’s combined effort and sportsmanship. He said our Starlight boys play the sport the right way- with our traditional Starlight spirit!

Starlight recently picked up a big 49-19 win over Nesher in the Upper Inter Boys division. A solid performance from all team members made for smooth transitions across the court which resulted in baskets. Leading the scoring for our boys was Ben S. who had a game high 9 points. Avi K. poured in 8 points, while Casey B., Reece M. and Caden Z. netted 6 points each. Finn M. had a nice defensive game with 3 steals and also tallied 4 points. Starlight held a 28-4 lead at half-time and did not look back as they continued to dominate and eventually claim the victory.

This entry was posted on Monday, July 30th, 2018 at 11:45 am and is filed under Summer 2018. You can follow any responses to this entry through the RSS 2.0 feed. You can leave a response, or trackback from your own site.